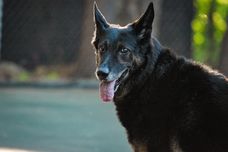 Casey Duffy has been at camp for the past four summers, and even though he has formally retired from chasing tennis balls, he enjoys easy walks all over camp and swimming in the lake. Born in November under a scrapped car in an auto body storage lot along with ten brothers and sisters, Casey had never seen or walked on grass for his first year of life until he climbed the 8-foot fence over barbed wire and wandered a few blocks in Elizabeth, NJ for several days where Merritt found him laying down on a side street near the back of her office building thinking he might have been hit by a car which, gratefully, he had not. Casey’s favorite activities include rolling in fluffy snow, enjoying the out-of-doors, and if he had his way, never to leave Merritt’s side.