The people are just amazing. Adirondack attracts the best of the best, and I’ve met some of the best friends anyone could ever ask for at camp. They are the kind of people that, even if you don’t see them for a year or two, nothing changes.
—Paige H, Staff

Favorite moment? Standing on Ranger Rock watching the sunset with all the girls in my cabin.
—Shai G, 2012 Senior Camper 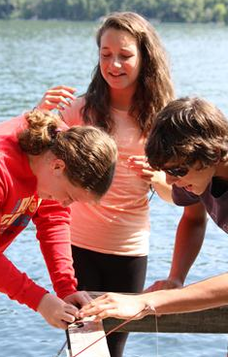 “My favorite moment was catching my first fish in 3 years! The counselor MK taught me how to hold and take the fish off the hook even though I was terrified. Fishing was really fun!”
Kathryn R, 2012 Camper

“My daughter is a lot more self reliant and affectionate (I’m surprised). She is so happy to have had the experience and she wears her camp attire with pride. It brings back memories when she wears her shorts and camp shirts. She even sleeps with her camp pillow that all her “new” camp friends and counselors signed. Overall, it was a terrific experience for her!" —Rosie S, 2012 Parent