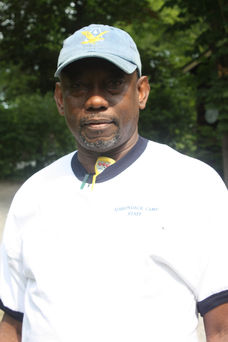 “We have a Chef, and he’s the best, and Carlo is his name-o!” After an especially fantastic meal, Adirondack campers pound the tables singing “C-A-R-L-O” to the tune of Bingo, which brings Carlo dancing out of the kitchen! Carlo is returning for his seventh season as our Head Chef, and he’s part of the heart and soul of Adirondack. He’s known for going the extra mile; if a camper lands a big fish and wants to e,at it, Carlo cooks it. Every camp,er knows and loves this hardworking man with a big smile and a big laugh.

Carlo became intrigued with cooking at an early age in his native Haiti, and he trained as a chef “from the bottom up” in a variety of restaurants and college kitchens. Carlo trained under a French Chef early in his career, and this French influence subtly flavors Carlo’s delicious dishes today; Carlo is also fluent in French. During the school year, he’s a Chef at Brandeis University. He forms a strong bond with his kitchen crew; laughter and mouth-watering smells float together from the kitchen. Carlo likes the environment, the atmosphere, and the people at Adirondack. “Basically the camp provides me with a stage and I’m just performing. The campers are just inspiring!”